Clonakilty: U12 Football vs St Colums

Match Report:
The eagerly awaited final of u12 Div. 1 League Cup between the two standout teams in the West Cork division was played in perfect conditions in Ahamilla on Monday evening. A lot was expected from both sides as Colums had scored 23 points in their semi final victory while Clon in the other semi-final continued to show they know how to score goals. The previous game between the two sides had gone to extra time with Clon edging it by a single goal in a wonderfully entertaining game which ebbed and flowed throughout. Coming into this game both teams would have felt they had a serious chance of claiming the silverware if they played to their potential. However finals can be nervy affairs even for the most seasoned of veterans and it seemed understandable that both sides would have their fair share of jitters on what is a huge event for young boys. 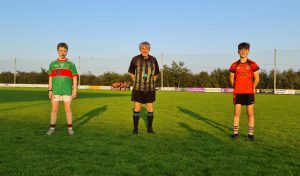 From the throw in Clon started at a frantic pace, Illan Smith was very much to the fore in the opening exchanges with surging runs through the middle from center forward. One strong run saw Illan flick a pass beyond the advancing fullback to Christos Delis who deftly toe-poked it past the keeper to only see it rebound off the base of the left post and unfortunately it just didn’t fall for the advancing Finn O’Mahony. At the other end of the pitch the Clonakilty defense was settling admirably to the task at hand; the fullback line of Eoghan Minhane, James Costello and Fionn O’Donovan were on top and cleared their lines smartly. The half back line Michael Francis Collins, Ben Coffey and Peadar Dinneen in turn were linking well with the midfield and feeding some clever ball down the channels to wing forwards Conor O’Gorman and Fionn Gilmore. While Clon were doing a lot of good work building from defense they were not translating this into scores on the board. After several wides and blocked shots, Clon created a possible goal chance when Bill Bennett cut in from the left corner but his fist pass to Emmet Nolan was intercepted and it looked like Clon were going to rue the missed chances. Clon eventually got off the mark with a well taken point from play Emmet Nolan, which was followed soon after by well taken free from the right boot of Conor O’Gorman and when a short time later Peadar Dineen surged forward from wing back to kick a great score it looked like Clon had finally started to settle. A lot of Clon’s best play in this half came down the right wing with Conor O’Gorman a constant outlet for his defenders.

However a combination of poor shooting and a tendency to over the play the ball in front of goal meant that Clon didn’t push on from there. History often repeats itself and Colums who had weathered a similar early onslaught in the previous game between the two sides in Keakill suddenly started to come into the game. The center of their defense settled into the game and with their midfield starting to win possessions cleverly from well worked kickouts they started to create their own opportunities and were rewarded with two fine points in the second period of the first half reducing the score to minimum. When Emmet Nolan crashed another effort off the crossbar late in the first half it looked like lady luck was not with the home side. An intriguing sub plot to the main event was the tremendous midfield battle between Jack Byerley and his direct opponent the Colum’s No8 with both boys enjoying periods of dominance and this translated into periods of dominance for their respective sides.

The half time score was Clonakilty 0-3 and St Colums 0-2 was a poor return from two really good footballing sides but it was clear that they were coming to terms with this being a final and how this impacts the mind. In the third quarter it really appeared that Colums would make Clon pay for their wastefulness in the first half as they got on top in the middle third and cleverly worked the ball into the scoring zone. They struck first blood with a nice point from play which was cancelled out by clever point from Christos Delis and quickly after this Jack Byerley curled a lovely point with his trusty left boot. It looked like that Clon may be starting to make their possession count in the only place it mattered. The resolute Colums side came back strongly and kicked another point to reduce it to the minimum before it was their turn to be denied by the woodwork when a tremendous effort rattled the crossbar and when the rebounded effort was blocked by Eanna Deasy it felt like a real let off for the lads in Green and Red. The last minute stand in keeper replacing the injured Tomas Fitzpatrick made a number of excellent saves but this was probably the most important to deny Colums as a major score at this point would have possibly swung the game in favour of the Kealkil side instead they had to settle for a point from a free from the resulting scramble for the rebound.

The final quarter was definitely not one for those with any cardiac conditions as both sides threw caution to the wind in the search of the decisive score that would edge them over the line. Clonakilty made a number of changes bringing in Mattie Lyons for Finn O’Mahony, Peter O’Mahony going to wing back and Michael Francis Collins moved to the edge of the square instead of Bill Bennett. The game continued at frantic pace and it was at this stage that the hard working Fionn Gilmore and Christos Delis became important ball winners in forward line to get Clon some badly needed time in the opposition scoring zone but still Clon couldn’t get away from the defiant Colums lads.

The key moment came when Fionn Gilmore won another hard fought free advancing on the goal and the responsibility fell to Conor O’Gorman to edge Clon further in front, however his well-placed free was dropping just short when Emmet Nolan rose highest to claim it in a packed square before turning to blast the ball low and hard into net. This looked like it would be a decisive score in a low scoring but a very tense and dramatic game. With commanding centre back Ben Coffey cutting out a lot of attacking opportunities and Peter O’Mahony also winning a number of key turnovers Columns needed a plan B to get a score to level matters and they cleverly used the significant aerial threat of their big number 8 to attempt to poach a goal from a number of frees dropped into the box. In response the excellent full back line of Eoghan Minhane, James Costello and Fionn O’Donovan smothered any attempts at a shot and they showed considerable defensive discipline and coolness beyond their years to not give away any frees which would allow Colums to make matters even more nerve wracking for the home support. To be fair Clon tackled like demons at both ends of the pitch including sub Mattie Lyons who turned over the opposition a number of times to stop them building from the back.

With time running out a long ball from Illan Smith caught the Colums defense out and found Michael Francis Collins in loads of space and he showed great composure to rifle the ball over the bar for the insurance score and ease the frayed nerves of Clonakilty supporters. There was still time for Colums to salvage something from the game but with Clon defense still focused on the task the visitors could not manufacture the clear goal scoring opportunity they badly needed.

The final whistle was greeted with great jubilation from the home side who reclaimed the cup for the first time since 2010 when a team that contained current Clon & Cork Senior Liam O’Donovan took the honours. Fachtna McCarthy presented the cup to the proud captain Illan Smith.

A quick tour of the town, followed by a trip to Noel White’s filling station for sponsored ice creams capped off a night which will live long in the memories of the victorious Clon boys. 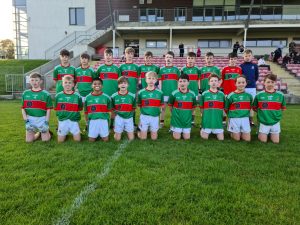